Celebrity Cosmetic Surgery. Trying to Keep up With Khloé Kardashian

By now, Twitter is used to earth shattering revelations of celebrity cosmetic surgery  so, when, on May 23rd last,  @superfly sister announced that Khloe Kardashian  is ‘looking different every year.’ the Twitterati jumped in with their thoughts.  Certainly the montage that @superfly sister posted shows a bewildering range of changes  to the hugely famous and endlessly photographed Khloe.. 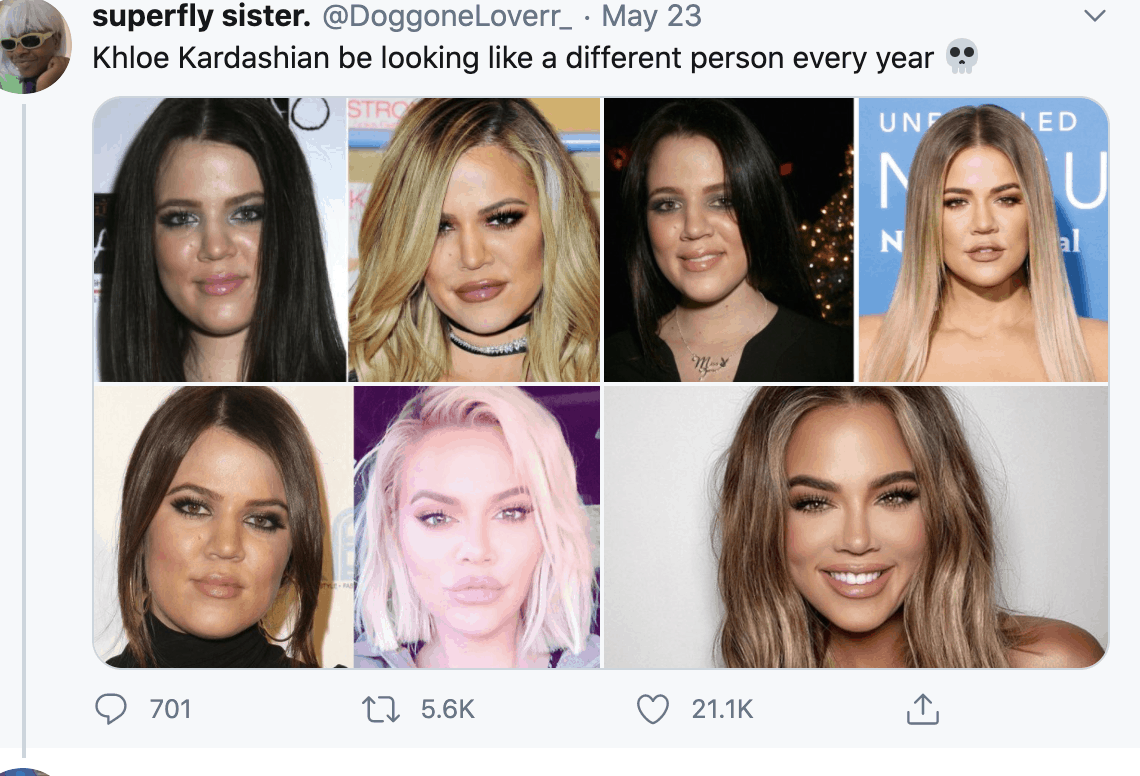 Whilst many fans are enthralled with the antics of this celebrity family, the Kardashian tribe are continuously criticised on Twitter for giving the wrong example to young women.

Twitter posters like  @DoggoneLoverr express succinctly what many others think ‘Why is this family so obsessed with their looks? Sends a bad message to little girls that this is the only thing that matters.’

So let’s ‘timeline’ the startling changes media observers have noted on Khloe.

This is how Khloé looked back in 2007– fresh-faced with delicate features, hardly any makeup and long brown hair. She looked and so different than she does right now. Not a negative thing, most of us evolve with time, right?

” She has naturally got hips but not a very defined waist and boobs of around a C-cup so she's got more of an oblong form,

However as Khloé's celebrity starts  to rise, it's not simply her shape that will change – so will her face including her nose, chin and lips.

She begins off reasonably square-jawed with a wide chin. In this shots she also has a fairly full nose.”

As Keeping Up With The Kardashians becomes a global hit, Khloé is known for being the hilarious, charming sister.

But the fact that at 5ft 10, she has a very different physique to her petite sisters means that initially she felt differentiated from her siblings.

Apparently, there was even a standing joke in the family that she had a different father, rather than being the daughter of late lawyer Robert Kardashian, like Kim and Kourtney.

Later on Khloé also divulged how, around this time, she was humiliated by shop assistants when she went shopping with her sisters and she was told they didn't have her size. This, I for one, take with a big pinch of salt.

As she began to come out from Kim's shadow, Khloé landed her own sequel reality show with her eldest sister Kourtney called 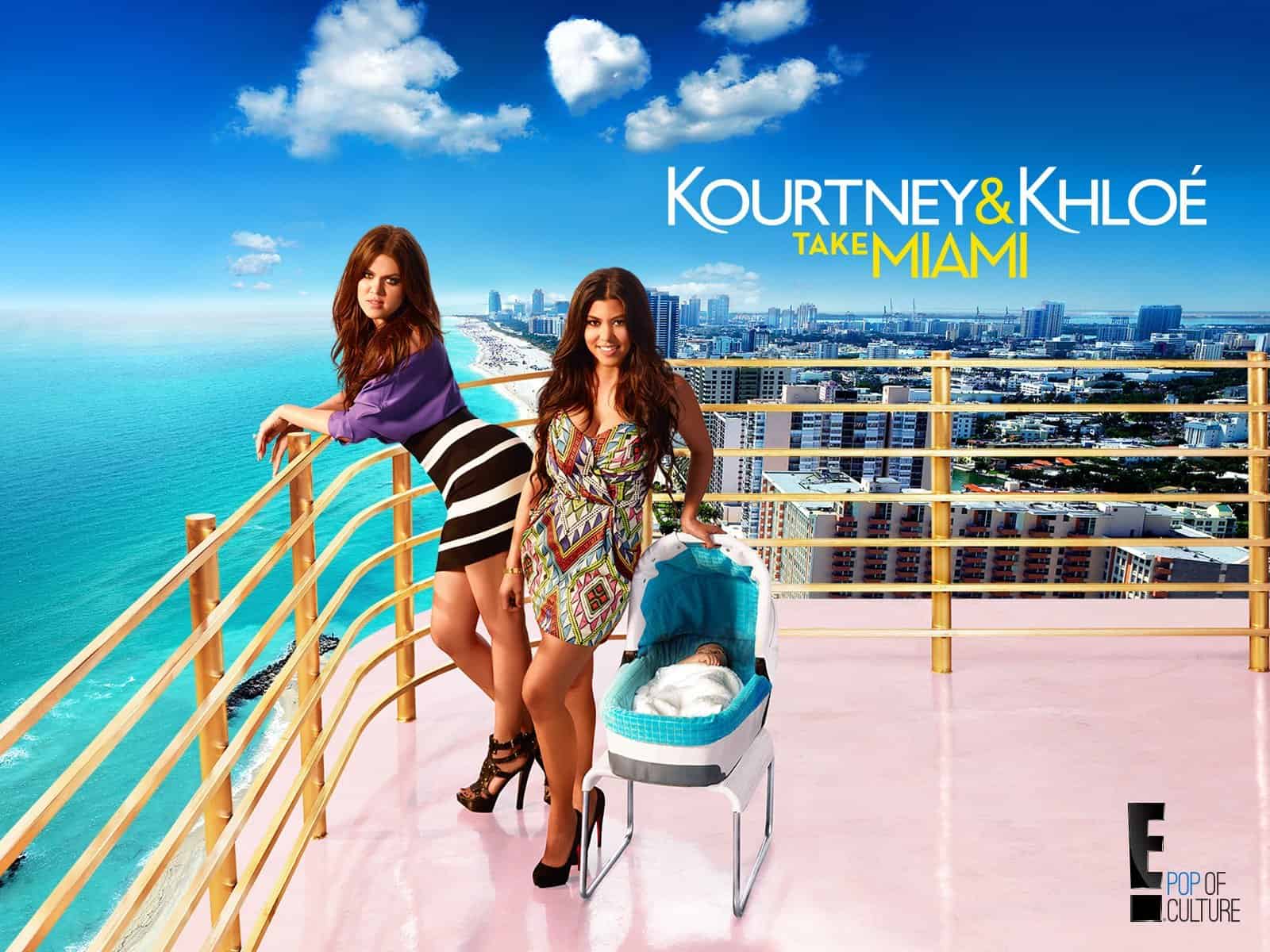 She also commenced dating Lakers star  Lamar Odom and after a speedy three-month romance, the pair announced their engagement.
With a new TV series and a wedding on her plate, Khloé started to exercise more seriously – up from two days a week to more regular sessions.

She also became a spokesperson for diet product QuickTrim which she declared helped her burn fats faster.Later consumers tried to take legal action against the sisters for $5million dollars on the grounds it didn't accelerate weight reduction, as stated. Nonetheless, photos this year do show Khloé with a slightly slimmer lower face but it might not have come from Quick Trim.

According to the classical rules of proportion for celebrity cosmetic surgery,  the distance of the hairline to the bridge of the nose should ideally be about one third of the face.  So she could well have had laser hair removal to adjust the forehead/brow area in the same manner as her sister Kim has admitted doing. This would have helped give a more open aspect to her facial features.

Although Kim has always been famous for her legendary bottom, it's only now that Khloé starts to show a pronounced family similarity – though it's more likely to be due to an acquaintance with her sister's cosmetic surgeon.
Commenting on Khloé's bigger bum in The Sun Newspaper , Dr Fulvio Urso-Baiarda an expert on celebrity cosmetic surgery said: ‘ I think she has Brazilian butt lift. It's most likely fat grafting.
” As the donor site is more probable the waist or tummy of the flanks, what will slim her waist too, producing more of an hour glass appearance.”

However Dr Urso-Baiarda says this would have been a high risk approach as the Brazilian butt lift has the highest fatality rate of any cosmetic operation.
To make things clear that not all of transformation was due to celebrity cosmetic surgery,  Khloé also starts to feature her daily workouts on Instagram and Snapchat.

As her relationship to Lamar begins to collapse, due to rumours of infidelity, Khloé has said the gym became her hiding place.She said: ‘I decided to channel my energy into working out.” If I went out with my girlfriends I would be hounded by paparazzi and made to feel more humiliated. The gym was my only refuge.'

With her newly-blonde hair, Khloé gave followers an up-date on her fitness program.
She said: “I try to work out like five days a week, it's a lot but I feel great when I do it.”
She also says she has hired a nutritionist who drew up an individualised profile based on the review of fats in her blood, and asked Khloé to cut out yeast, gluten, and dairy.

Khloé pushes home the message that she wishes to think ‘strong and fit ‘when she publishes her book Strong Looks Better Naked which she commemorated with a photoshoot to show off her toned abs.

In addition to admitting she had lip filler this year, Dr Urso-Baiarda says Khloé's face contour seems to be transforming significantly now.
He says: “Something interesting seems to have happened specifically between 2015 and 2016, where Khloé's cheekbones become more defined and her mid-face less full.
” One possibility is that she had buccal fat pads– (two pouches of fat on her lower side of her face)- removed.”
This could have entailed a surgeon making small cuts to the inside of Khloé's mouth and cheeks to remove them.
This can help produce a more sculpted, slimmer look in the hollow part of the cheeks, giving Khloé a more delicate face shape.

From being the sister with the squarest jaw, by now Khloé seems to have acquired the most pointed and defined chin.
The most probable reason is non-surgical dermal fillers, which have defined her face and given her a more chiselled appearance.
Dr Fulvio Urso-Baiarda says: “By 2019, she has a very crisp, defined jawline. I think that's most likely been done non surgically.
” Around now, Allergan launched a product that they were heavily marketing for the chin and jawline called Volux.
” It's a filler which allows for very high projection so you can create very sculpted looks. So I suspect this is Volux or a similar product.
” You can narrow the chin in quite a similar way to the nose, and you can also reduce jowls and tighten the jawline by extending the chin forwards, increasing the cheekbones.”
Whatever way Khloé has done it, she now has a face our expert says “has become a very well-defined inverted triangle.”
Dr Julian De Silva another expert on celebrity cosmetic surgery,  has also told Fabulous Digital he believes Khloé got this look by adding more to her chin rather than taking it away.
” Before, her chin looked out of balance in her face. After, her chin doesn't look smaller but it looks more in balance with her face.
” If you have a larger chin there are two ways to address that.
‘ Either you shave down the chin in a surgical procedure or you add volume through fillers in the cheeks and the jawline to address the balance.”

So here we are in 2020 Post Covid and the jury is still out on the changing face of Khloe Kardishian.   Insider Mag has also been investigating the mystery behind the changing beauty.

Insider was speaking to  Dr. Arash Moradzadeh, a plastic surgeon based in Beverly Hills, California, and  it does appear Kardashian has had a number of facial procedures.

It's difficult to pinpoint when exactly she had them done, though he says he can't imagine lockdown being any kind of obstacle for surgeons, if they received a request from a Kardashian.

“I'm pretty much sure that there's going to be some doctor out there that for the right price will do whatever someone wants,” Moradzadeh told Insider. “But we don't really know if she had her procedures done during [lockdowns]. It could have been done at any time. It's always difficult, especially with that family, to tell what's real and what's a filter.”

Our fascination with the Kardashian clan is endless and they have certainly given the green light to a generation of impressionable young ladies to get cosmetic treatments at an early age.   It is no longer a question of ‘holding back the years' since very few years have passed since first grade.

PrevBotox, Fillers and Education in the Cosmetic Beauty Business
Recuperate in Style. Our Top Tips to Relax After your Cosmetic Procedure.Next