The Truth About the Vampire Facelift.

During the last 5 years, Platelet Rich Plasma (PRP) treatment has expanded from its role in healing injuries and knee osteoarthritis in adults into a major trend in cosmetic and plastic surgery.  So what is PRP and should it be a treatment for you to consider in 2021? This treatment which involves injecting a small amount of the patient's own blood to release various growth factors from the platelets has moved on from its celebrity fanbase to a wider demographic. Apart from toning up tired skin, PRP is also frequently used in hair transplant procedures.

So Are You a Good Candidate for a Visit From the Vampire?

Have a look at our quick checklist to see if a PRP (vampire) shot is a good treatment for you.

1. Your skin colour has become more grey due to a lessened blood flow.

2. Your face has become ‘droopy' with age and facial muscles look like they could collapse.

3. Skin texture becomes less smooth. The youthful glow has gone and you exhibit the scary signs of ageing.

If this sounds like you then let's see what actually happens with this treatment.

PRP injections are prepared by taking anywhere from one to a few tubes of your own blood and running it through a centrifuge to concentrate the platelets. These activated platelets are then injected directly into your ageing facial tissues. . This releases growth factors that stimulate and increase the number of reparative cells your body produces.

So why not just have a regular face lift?

Cosmetic surgery can remove excess skin and make the person appear younger. But, a surgical facelift can be more than what's needed for some people (especially when loss of shape without extra skin is the main problem).

Hyaluronic acid (HA) fillers lift the skin away from the bone to restore youthful volume and shape. But HA fillers can cause problems near the eye. Also, the injector of HA fillers can chase a wrinkle and create a shape that looks like a visiting alien.

Unlike most procedures, the Vampire Facelift offers a way of both restoring shape, and improving tone and texture, as well as literally rejuvenating new and younger.  it also gives ‘bragging rights' on social media.   It sounds mysterious and deliciously ‘goth' as a process.  Although whooshing your own blood around in a centrifuge is nowhere near as spooky as the name suggests.

Do I need To Prepare Myself for a Vampire Facelift?

Well yes, to an extent.  There are some things to bear in mind.

After the procedure most of the same prohibitions apply and also you should keep exercise to a minimum for 7 days.  Also probably best to avoid selfies which will show redness and maybe some scaly bits.   Give it a couple of weeks before you post your post-vampire pics to your admiring fans.

Here is Kim K's Vampir Pic which is not necessarily a ‘good look'. 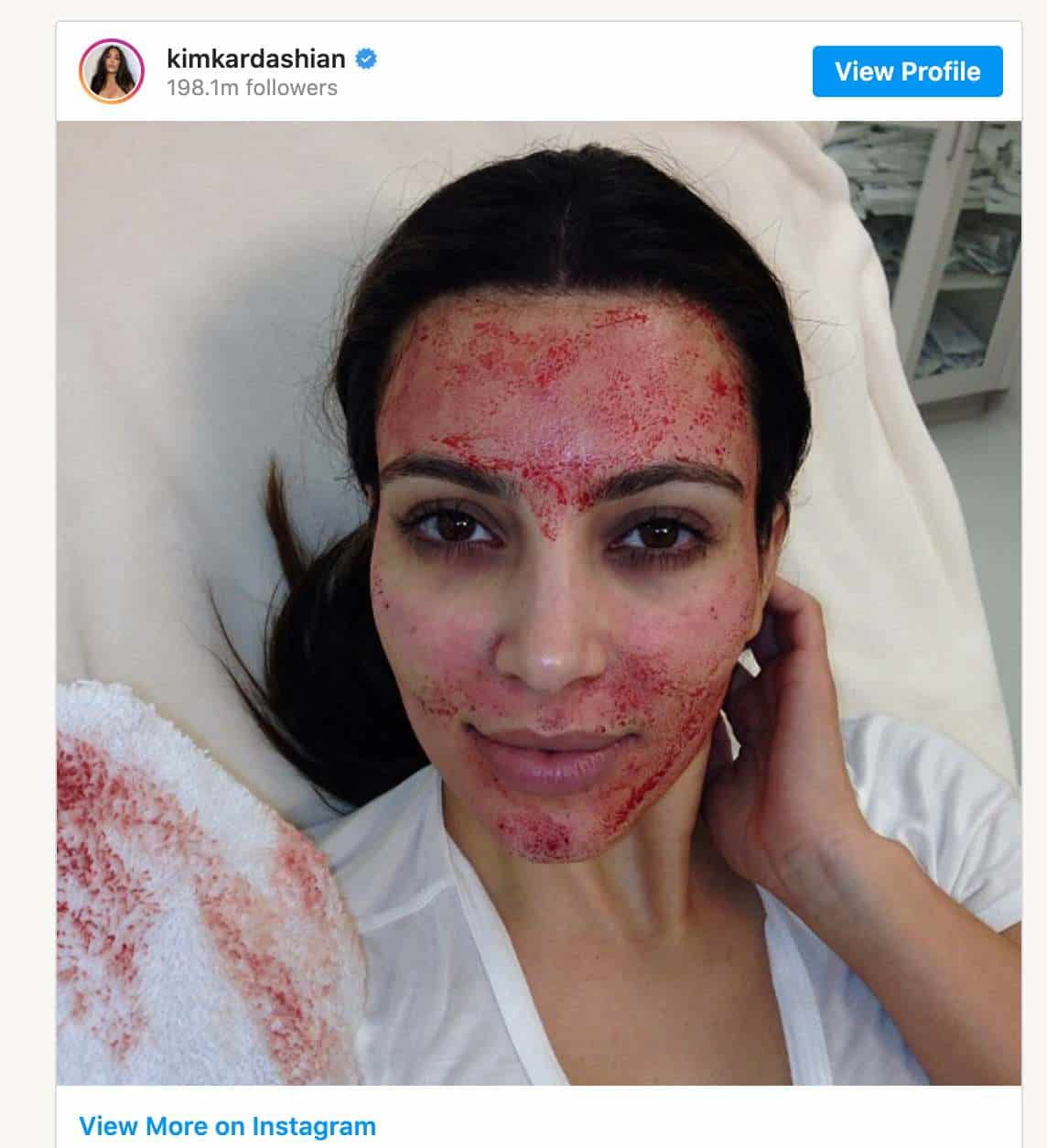 Talking to Allure, Kim said  “A few years ago, I heard about a ‘vampire facial,' and I was so intrigued,” Kardashian West wrote. Right before she signed up to try the treatment, she found out she was pregnant, which meant that she couldn't use the a numbing cream or painkiller before the treatment as doctors typically recommend, she says. That made for a super uncomfortable experience. “It was really rough and painful for me. It was honestly the most painful thing ever! It's the one treatment that I'll never do again.”

But, according to Rebecca Norris writing in Nylon site Kim's shock horror Instagram pic is easily explained.  Back in 2013, the normal vampire facial procedure was to apply whole blood to the skin while micro-needling, where nowadays technology has advanced to using the most regenerating part of blood, the PRP. While both methods use blood drawn on-site, the PRP method extracts the platelets from the red blood cells after being put through the centrifuge. And so, I finally understood why my Kim K-inspired expectations weren't fully met.

In the same article, Ms Norris tells us that while the hours immediately following the hour-long appointment were characterized by an unsightly red, ultra-puffy complexion (which was really just exacerbated by the fact that I have sensitive skin), with the help of an even layer of Alastin Regenerating Skin Nectar, by day two it looked like I had a low-key sunburn and day three my skin looked radiant and refreshed.

So there we have it.  As science advances so do the results from the Vampire facelift.  We only wish to bring you the options available in the marketplace, you have to choose thoughtfully which of them are best for you.  Do let us know your experiences with PRP treatments.

So what about the cost?

In the UK, you should expect to pay around £1000 for a face and neck PRP therapy session.  Prices in the USA are similar ranging from $1250 to $2000 depending on the clinic.  Anyway, it is much cheaper than a surgical facelift and a more interesting cocktail lounge topic.