The documentary, ‘The Truth about Cosmetic Surgery hosted by doctor Michael Mosley and journalist Mehreen Baig, takes a look at cosmetic surgery and investigates an apparent lack of regulation in the industry. Teaming up with blogger Mehreen Baig, Mosley explored the freaky world of lip and nose fillers, micro-needling and Botox.

Dr Mosley who made a big name for himself with his 5:2 diet plans and his regular articles and book serialisations has turned himself into a medical investigative reporter for this BBC ‘Shock Horror' fest. Mehreen Baig a Muslim journalist/blogger and activist joins him on this documentary.  She previously presented a BBC documentary series on religious pilgrimages.  This has a certain irony to it since the road to cosmetic perfection (i.e look more like Kylie Jenner) is looked upon as a pilgrimage by people interviewed in The Truth About Cosmetic Surgery

Indeed, according to a young Mancunian woman festooned with eyeliner, tattoos and pumped-up lips, a major motivation for having cosmetic treatments is to make yourself look more like Kylie Jenner and the Kardashians. “Big lips, square jaw, tiny waist, big bum, big boobs – now it’s become commercial enough that we can get it,” she explained..

During one scene in The Truth About Cosmetic Treatments, a woman had her bones literally scratched.

Presenter Mehreen explained: “Stem cells [are] a medical advancement that could help with things like bone and tissue regeneration. They’re now being adopted by cosmetic surgeons who claim they can help rejuvenate the face.”

Twitter was understandably ablaze with condemnation, shock and pithy opinions about The Truth About Cosmetic Surgery. 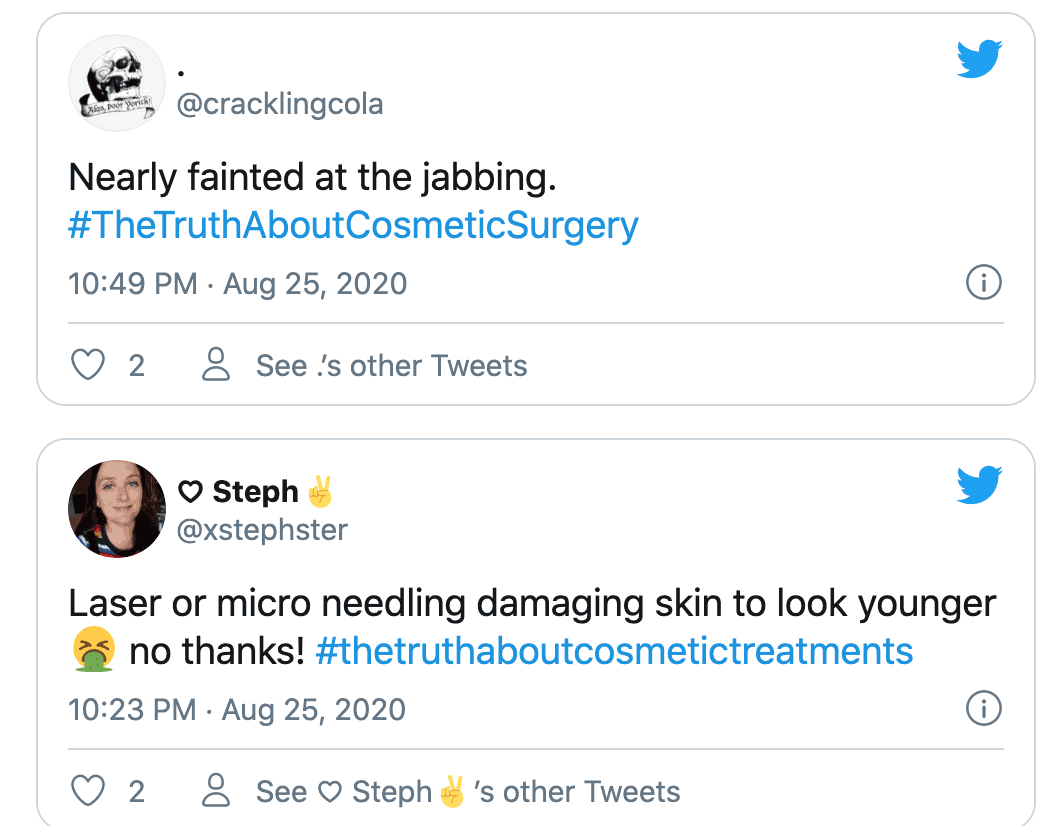 Strangely another viewer said that watching this episode made her even keener to try the procedures.

“I don’t think it’s a good idea for me to be watching,” they tweeted. “Essentially I now want all these treatments! Fascinating stuff even for the needle-phobic like me #squeamish.”

Mosley had assembled a panel of punters on The Truth About Cosmetic Surgery to look at “before” and “after” photos and assess whether the treatments had made the contestants look more attractive. “They lost their personality,” one man said. As dermatologist Tamara Griffiths warned, then, it’s a case of “buyer beware”.

Our regular readers will know that we think cosmetic surgery s sometimes badly marketed to impressionable young people through social media and programmes like this and Skin Decisions in the USA show the ‘skull beneath the skin' by peeling away the glitz, glamour and Instagram filters.

Admin is Blogger David Miller FRSA. M.Sc A respected British journalist based in Helsinki Finland. David's portfolio is at http://livewire.pressfolios.com/ David is contactable via the site or at [email protected]