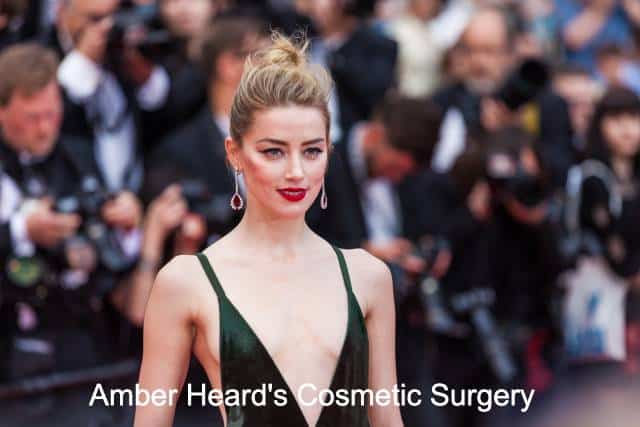 Given her success in Hollywood, it's no surprise that the movie star has turned to cosmetic surgery and other treatments to enhance her natural beauty.

Sadly much of her enhanced beauty has recently been on display in the courtroom rather than on the red carpet.

When Dr Youn, who has amassed 7.7 million TikTok followers, went viral for speculating whether Amber and her former husband Johnny Depp have ever undergone cosmetic surgery, he did it in a fun and lighthearted way.

People were incredibly divided in the comments on Young's video. “She looks exactly the same; it's just makeup and age and maybe lip filler,” one fan protested, as another wrote: I honestly feel like she looks mostly the same.

Amber Heard's nose appears to have been thinned, so I do believe she's had a rhinoplasty,” says Dr Youn.

“She looks better, but it doesn't look like her nose before.” Dr Youn adds that Amber could have gone for a nose job as recently as five years ago. “The nose job can be done at any age, but I would advise people to get it done if they need it. Many women in their 20s are not aware that their noses are changing and looking different.

Dr Youn suggests that Amber may have used hyaluronic acid on her lips to make them plumper.

Her cheeks look different, and some doctors think she may have had cheek implants.

This is not just weight loss or ageing changes. We would expect to see facial fat loss throughout the whole face with weight loss, not just in a specific area.

We would expect to see those ageing changes later in your 20s, whereas, with Amber, it happened within a year.

The bridge of Amber's nose has been narrowed, and her nostrils have been brought inward since the next change I noticed was Amber's nose being straight and symmetrical in a recent photo.

This would corroborate Dr Youn's suggestion that Amber had had some rhinoplasty work done.

Lorry also mentions something called a corner lip lift which raises the actual lip corners. The incision for this type of lip lift is made within the nose or at the base of the nose. Lorry is very good at making these detailed forensic observations which are why her videos get a loyal audience.

Both Youn and Lorry comment on Amber's cheeks. Youn says, “Her cheeks also look different. They're shaped a bit differently. Some doctors suspect that she may have had cheek implants, and I do think that's possible.”

Lorry is quite definite on this. “Amber starts out with a mostly flat cheek, but this doesn't hinder her looks in any way as she was already so beautiful, and really not everyone needs large cheekbones, which makes it all the more puzzling that Amber opted for quite large cheek implants.”

Dr Youn also makes much of Amber's teeth and chin, and like Lorry, he thinks there has been some Invisalign work since Her front teeth no longer overlap her bottom lip, along with bleaching and porcelain veneers to perfect their colour and shape.

Amber has probably also used Botox to reduce the wrinkles on the forehead and glabella crow's feet.

She may have had a procedure like a blepharoplasty, which is an under-the-radar procedure. The excess eyelid skin is removed, so the eyes are wider open. The biggest changes were to her lips, teeth and lower face. She gets lip enhancement to increase the size of her upper lip, which was thinner in her younger days.

Her front teeth no longer overlap her bottom lip, so she probably used something like Invisalign, along with bleaching and porcelain veneers to perfect their colour and shape.

Since it's common to have a recessed chin when you have an overbite, she may have put filler or an implant there to bring more balance to her face. As for her lower cheeks, remember that they went from being full at age 21 to gaunt just one year later. So I suspect she had some type of fat removal there, too.

Overall, Amber had several procedures done, but the outcome was undeniably positive.

When it comes to cosmetic dentistry, we don't usually think about how it can change your life, but these examples show you that the impact of this work can be dramatic.

Amber Heard’s cosmetic surgeries are not just vanity, they’re marketing. She is a major celebrity in Hollywood, which means she has more power than most people. People want to be like her. She is an inspiration for young girls, who want to look like her. Amber Heard’s cosmetic surgeries are an example of how much power celebrities have over their fans. Read this article if you want to know more about how Amber Heard became a beauty icon.

PrevTypes Of Lip Injections And Their Benefits
Minimally Invasive Cosmetic Surgery – Which Procedures Should I Consider in2022?Next